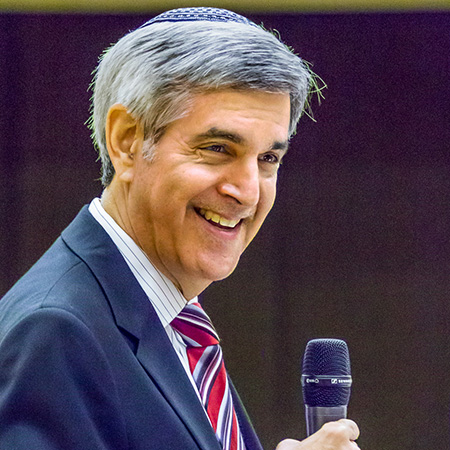 Cantor Richard Cohn became Director of the Debbie Friedman School of Sacred Music in July of 2015, following thirty-four years of service to Reform communities. He was most recently Cantor of Temple Emanu-El in Dallas, Texas, where he was influential in helping to integrate contemporary and traditional aspects of congregational life, while sustaining a diverse and vibrant musical culture. He enjoyed a lengthy tenure at North Shore Congregation Israel in Glencoe, Illinois, where his areas of specialization included programming for teens and for adult learning. He also served Oak Park Temple–B’nai Abraham Zion in suburban Chicago, where he developed personalized approaches to b’nai mitzvah studies. He has been vibrantly involved in worship transformation, and he has had an innovative impact on Jewish choral music as a conductor, arranger and composer.

Cantor Cohn has often been featured as the soloist in Ernest Bloch’s Avodath Hakodesh (“Sacred Service”), including performances in Israel with the Jerusalem Symphony Orchestra, at Chicago’s Grant Park Concerts and at the Berkshire Choral Festival. While living in the Chicago area, he appeared as a soloist with the Chicago Symphony Orchestra under such conductors as Claudio Abbado, Daniel Barenboim, James Levine and Sir Georg Solti. He was the founding conductor of Kol Zimrah, the Jewish Community Singers of Greater Chicago, which he led for nine seasons, and he has been a frequent principal conductor at the North American Jewish Choral Festival.

Cantor Cohn is involved in the work of the Institute for Jewish Spirituality (IJS), which seeks to cultivate practices of contemplative Judaism as portals to spiritual growth. Having participated in the first cantorial cohort of the Institute, he is now an IJS Fellow, as well as a faculty member of its Clergy Leadership Program. He was a member of the IJS Prayer Project Working Group, and he has taken particular interest in the integration of spiritual practice with areas of prayer, music and education.