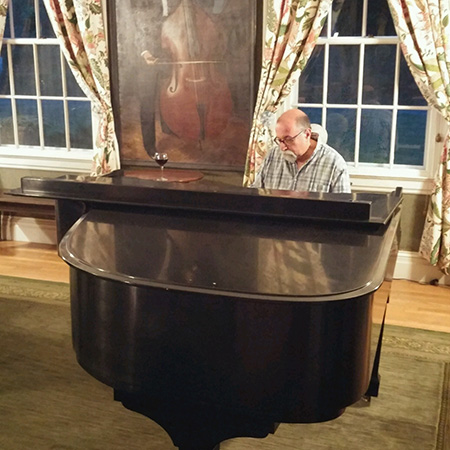 Alan’s formal piano training began at age 7 and continued until he was 15. In that period, he had over a half dozen teachers and studied a wide variety of music, including Bach and Beethoven, boogie-woogie and Broadway, pop hits, and fake book standards. During that period, he also learned musical arrangement and accompaniment techniques. He stopped taking formal lessons when extracurricular music endeavors in high school (musical/vocal direction for numerous shows and productions) began to take up a lot of his time. Summers through high school and college were spent playing the piano and guitar/bass and doing musical/vocal direction at different summer camps.

Alan is currently the organist/pianist at the First Baptist Church, and music director at Temple Anshe Amunim in Pittsfield, where he has been choir director and accompanist since 1995. He still gets calls for an occasional klezmer, jazz and folk gig. Alan also plays bass, guitar and banjo.